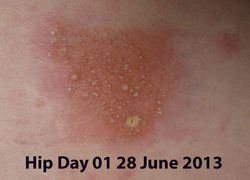 This is 24 hours after applying black salve to my hip.  After treating my thigh area and feeling the pain that shoots up to my hip, I decided to go closer to the site of the pain.  I was feeling a little frustrated at this point because the black salve just didn't seem to be extracting all of the cancer.  After the very lengthy 120+ days treating my thigh area I was searching to an answer for this dilemma.  I bumped into a naturopath friend at a farmers market and was told that black salve should be applied and left on the whole time until there is no more pain.  It will ooze and weep and hurt like crazy but this will ensure that it works right through to where the roots are.  I think it was Day 9 when I did apply black salve which was to stay for the entire healing time. 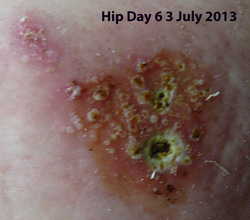 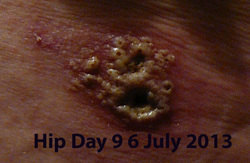 Ok, enough mucking about.  Now I know that the black salve has to be on for the entire time I will do this - with a fair bit of courage I might add because this is one of the most painful things can be done.  I have had spinal surgery in the past so I know what real pain feels like and let me reassure you - this is painful.  It was only through meditation that I discovered I had bone cancer and that I was to treat it with black salve.  Most people treat skin cancers which can be painful also, but nothing compared to deep cancers like this one.  I am grateful that I had a pain management plan sorted before starting and a doctor who kind of semi supported the process, although did not understand the kind of pain that comes from this. 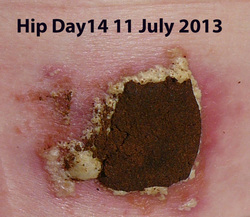 Just had to have a look what was going on.  It hurt like hell now!  Pain extended from the top of my hip bones, front and back, through to my pubic bone.  I could feel the track from the black salve application site to the pubic bone where it was carrying the dead cancer to the surface.

Regarding pain relief, as doctors only allow a few minutes for a visit, I didn't have a whole lot of time to explain.  I just needed to take the prescription for the the pain relief medication and be prepared.  I also discovered that the nature friendly pain relievers like medicinal cannabis and properly prepared opium poppy (as in traditional herbal medicine where the whole head is used and not just a toxic component of it) have been outlawed by the legal system/politics etc.  Quite a nasty and irresponsible move in my opinion, one that the cash hungry medical and pharmaceutical institutions would happily implement of course, however only leaving toxic pain relief measures available if you want to have the peace of mind that you won't be arrested by their blue mafia gangs and hauled through their courts to face the black magi(strate) who makes lots of bucks out of their so called service, not to mention the fear it creates. 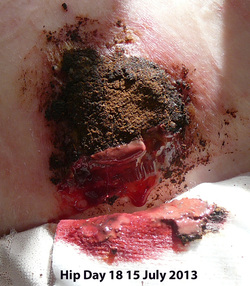 Ouch.  It feels like my hip is going to explode.  I guess in some ways it is.  At this point I spent most of my time in bed or on the couch and did use those pain killers.  I still managed to have my daily coffee enema to support my liver and also to take care of the constipation that the pharmaceutical medicines caused.  My diet at the time was mostly raw, vegetarian in that I sometimes had an egg or a tiny bit of cheese.  I avoided sugar.  A superfood smoothie consisting of almond milk, spirulina, barley grass, chlorophyll, maca, chia seeds, flax seeds and some fruit was something I found very nourishing and easy to digest.  I was taking a lot of supplements, things like zinc, magnesium (especially MgCl foot baths to take in the magnesium transdermally), iodine, Vitamin D, some liver herbs like milk thistle and dandelion in a liquid prepared by a medical herbalist (a gentle formula).  I muscle test when taking supplements.  I need to add Vitamin A and Vitamin E to my list when I can get them.

And a few hours later in the day, the eschar comes off with the dressing so now it is time to spray it with colloidal silver to keep it nice and clean and able to heal well.

This is a personal story and is only a description and evidence of the process, the thoughts involved, an very scant account of the healing journey etc.  What people do with this is up to them.  My hope is that it will inspire people to take response-ability for their own health in a way that most empowers them, and also that some ethical researchers would do the proper research into this so it can be readily made available to those who wish to use it with the support and back up that is so much needed.